Take control of your nation and fight for victory in this single player campaign WW2 game. Don’t let those cute looking soldiers fool you – this is a BIG WAR game for the ULTIMATE strategy and arcade player!

Are you on team axis or ally? It doesn’t matter because you get to choose your nation as you battle it out for world domination. For lovers of strategy, this game ticks all the boxes as you are in charge of managing your resources and planning, completing milestones, and outwitting your enemy.

LIkewise for the arcade buffs, you get to improve your skills as you level up with endless soldier, weapon and resource possibilities as your progress through the levels. With each level designed to represent a unique and fun landscape, immerse yourself in the action too as your tiny yet courageous soldiers battle it out in over 100 different scenes reminiscent of WW2. The visually entertaining skirmishes take place on muddy battlefields, snow covered farmland,abandoned villages; there’s also encounters with the enemy at sea where you defend your country and control the seas in epic battles utilising a raft of navy fleets.

If you’re a fan of QUALITY games designed with loveable characters, infectious arcade battles, humour, strategy, and also made with heart, then Big War Little Soldiers is just the game to immerse yourself in for HOURS on END! 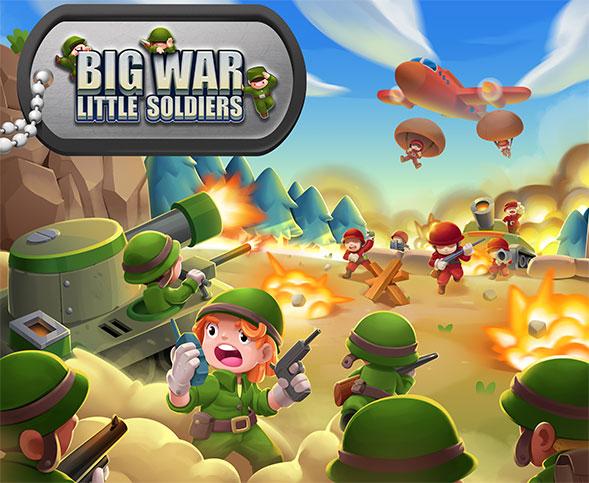 Play as a major nation and join the Axis or Allies and determine the fate of the world from WW2.

Capture valuable resources in the world map such as steel and oil to build infantry, tanks, and battleships to fight the war.

Pick from different modes such as arcade, campaign, missions and play the arcade style shooter!

Create infantry battalions to suit your style from riflemen, heavy gunners, snipers, support units and many more and play each battle in a
fast-paced arcade style shooter.

A social game! Join Big War, Little Soldiers; WW2 on Reddit, say hello on Discord, or sign up to our newsletter for the latest news plus more.